My millennial daughter shared with me the other day how she is using online shopping with curb side pickup to purchase her groceries. As a working mother of four children, this is a little like a Christmas gift that just keeps giving to her. In addition to avoiding the hassle of bundling up four children and keeping them all in line while buying the family groceries, there are the public germs she won’t have to contend with or the fear of kidnapping pedophiles that seem to be everywhere these days. But she said something else that caught my attention.

She said that people in the grocery store today are infuriatingly self-absorbed and rude. They stand in the middle of aisles, blocking passage for other shoppers or they are crazy people with earbuds talking loudly into a cell phone while walking at a zombie pace. She started to say it was her generation but then said, no, it’s everyone! This from my 30-year-old daughter. Aha, I thought, now you really are a grownup. Then we talked about the incredible problem with traffic.

Our conversation got me thinking about just simple etiquette, things people used to know, such as how to behave in public spaces, or in other words, how not to be an a**hole. But for the large majority of you that didn’t get that memo, here’s a quick primer.

If you are traveling on a two lane highway, the LEFT lane is for passing. This is pretty basic, but it appears many of you didn’t study your driver’s manual when testing for your license. If you are the self-absorbed idiot traveling 40 mph with seven cars on your bumper, you are the problem. It’s rush hour you simpleton. Get off of your telephone, be aware of your surroundings and for the love of God, get out of the way.

If you should change your mind on which direction you want to travel and decide that you are going to come to a full stop so you can get over several lanes to turn at the light 10 feet ahead, just don’t. If you can’t get over, how about not blocking an entire lane that has a green light because you’re not positioned to make a turn. Instead, go straight ahead, find a place to turn around, then proceed. Poor planning on your part, does not mean the world should stop for you. You are not that special and it makes everyone hate you.

I hate grabbing a cart at the local market and finding your nasty tissues, grocery lists, and other assorted trash left in the buggy. Clean up after yourself. There is no mystical elf hopping around cleaning up your nasty bits in life. It’s real people. And that goes for returning your cart to the corral where it belongs rather than just leaving it in your parking space for “someone” else to deal with.

Turn your phone off and concentrate on your surroundings and your shopping. News flash, you are not the president or a brain surgeon. Your call isn’t that important that you can’t wait to take it until after your shopping is done. You’re in everyone’s way and NO ONE wants to hear your conversation. It’s pompous and rude.

Don’t stop in the middle of the grocery aisle leaving your cart to block everyone’s egress. Pull to the side and let others through. Where on earth did you get the idea that you are the only person shopping on a busy Saturday afternoon? It’s incredibly rude and it gives me cart rage. That evil angel on my left shoulder wants to mow you down.

It’s a public space, dress accordingly. There is a reason the “People of Wal-mart” snaps are so popular, because you have to see it to believe it. But you find this type just about everywhere these days. It seems that common decency and self-respect needs a talking to. Do not wear leggings in public with every inch of your dimpled thighs and butt outlined like a dead person in chalk on the sidewalk. It really is nasty and I don’t wish to have my eyes assaulted. How hard is it to actually just put on a pair of pants? 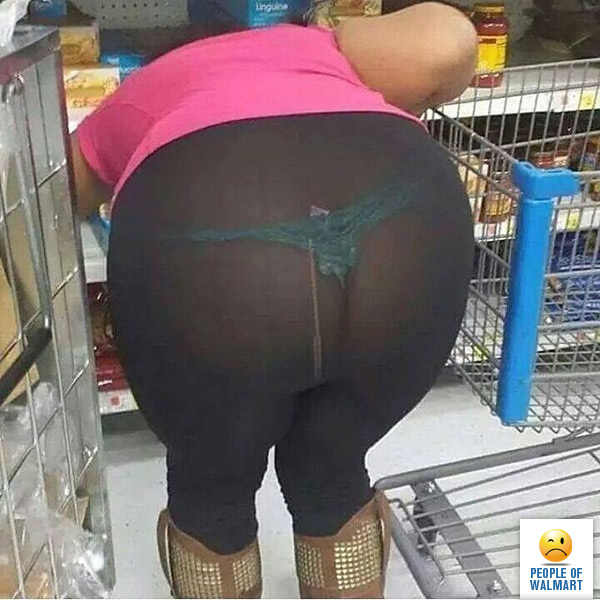 Call me old-fashioned but pajamas are for the house, not while you’re out pumping petro or shopping. Have you no respect for yourself? For others? I’m guessing that wearing your night clothes out in public is your way of saying, “I’m special” or “I just don’t care” in a rebellious teen-agery sort of way. And you wonder why your life is such a mess. Stop being a mess! Put on some clothes and brush your hair. Your attire tells me you are pathetic and a zombie.

This is a simple one, but bears repeating. Wear clothes that actually fit you. Honestly, this is more for you women, but men can wear some pretty awful stuff as well. If you are a big girl, don’t squeeze into that shirt that is two times smaller than you. It rides up, exposing your midriff and clings to all of your fat rolls. Go two sizes up, not just because it is more respectable, but looks way better. Also, don’t be a sad woman screaming for attention by exposing half your breasts to Saturday afternoon shoppers, including children. Save it for someone who actually wants to see it.

On to the men, everyone wants to be comfy on a weekend, but at least look clean. Don’t wear the tattered and stained sneakers you just cut the grass in and your favorite tee with greasy pizza stains and small holes. Between that and your five o’clock shadow, you look homeless or like you never get sex.

Why do we have to keep repeating this? Because apparently many of you don’t read. Do not check out at any store with a phone to your ear. Be courteous to the person checking you out. Try a greeting and a smile. He or she is actually a person. This is the same for a waiter attempting to take your order or a receptionist whose job is to actually assist you when you walk up to their window or desk.

When you call me, do not talk to others around you. You have interrupted my day by calling me. At least be courteous. This goes for putting me on hold so you can take another call. Again, you called me. It’s exasperating and I will without fail hang up on you. Your time is not more valuable than my own.

In social situations, do not make or take calls unless it is perhaps your babysitter calling to tell you little Johnny has been in an accident and you must come home. It is rude to your host and those around you who have taken the time to put together whatever soirée you are attending.

You can’t talk about etiquette without mentioning manners. More than ever people seem to act entitled and fail to use simple phrases such as, “Thank you” and “Please.” They fail at the simple art of showing appreciation, admiration or thankfulness in ever day discourse. When interrupting two or more people, they fail to apologize for the interruption. Simple phrases such as “excuse me,” have vanished from our lexicon. It will always be unseemly to not acknowledge others with a smile or a nod of acknowledgment.

It should go without saying that honey attracts a lot more bees than vinegar. Sour, ungrateful people are just tiresome. Hone your public voice and face before you leave the house because the public isn’t like your mother, we are not always going to love you. You do not live as a solitary human in the world although your digital connections may make you believe you have no need for actual people. Decency, manners and self-awareness still go a long way in a rude world. Reign well.